Interview with Composer To Hai 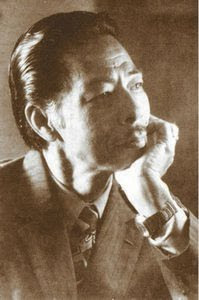 Editorial notes: To Hai or To Dinh Hai was born in 1927 in Hanoi. He started literal education and music lessons in a school of Catholic sisters in Hanoi. After graduating high school (1er French Baccalaurate),

To Hai participated in the National Defense Troop, then became a member of Communist Party.

Since 1947, To Hai has been well known with songs such as Nu Cuoi Son Cuoc (Smiles of Mountain Dweller) Tro Lai Do Thanh (Return to the Capital City)...To Hai has composed a lot, about 1000 music pieces. However, as per his confession, “most of my works were made by “order”, so they are actually singing out loud around propaganda slogans”.

In 1960, To Hai quit the Communist Party and retired from Army. After 1975, He moved to Saigon and in 1986 he took early retirement package. He chose to settle in Nha Trang City to live in seclusion and to avoid from “taking orders on what, how and to whom to write.”

Composer To Hai is 83 years old by this year. He’s sick, hard to move around, lying on his bed beside his PC, and is the oldest blogger in Vietnam. He keeps on writing to call for people’s disillusionment to give up communism, to reclaim people’s dignity which has been destroyed since the Autumn of 1945.

The book “the Memoire of a Coward” by To Hai will be publicized on Saturday, June 13 at 2:00PM at the auditorium of Nguoi Viet News’ Head Office by Que Huong Bookcase. On this occasion, To Hai, from Saigon, has agreed to join the tele-Interview with Nguoi Viet News as follows:
-Nguoi Viet: As normal, one usually writes good things about oneself in his/her memoir. However, in your case, you stated that it is the memoir of a coward; Why?

To Hai: In this memoir, I just wrote about my own cowardliness. The situation which I could not free myself from until retirement. In the past, when I was salaried by the Party and the government, in order to survive, I had to write things which I did not want to. I’m not different from some of my collagues who at the edge of their life have recognized the need of self reflection. I have done this self relfection for 15-20 years. But I dare not publish it domestically. I have to do it abroad. If there were freedom of speech in Vietnam, I would rather have it published locally. Up to now, even though the book has not publicized yet, Vietnam’s news papers have already insulted me. (Having a bad cough). I’m sorry, I’m not well so far. Therefore, I usually cough and cannot speak fluently.

-Nguoi Viet: In your Memoir, readers may see that when you were in twenties, you looked at the yellow star-red flag as the symbol of national pride. But later on, you said that, your dad used to told you that “because you have followed Communism, one day if you fail and come back home, your dad would drive you out of the door”. By that time, must your dad have recognised the harm which Communists may cause to the nation?

- To Hai: At that time, my dad was working in the post office sector. He could approach many books and magazines from abroad. So he read a lot and me too. However, we had very different view points. At that time, not only me but even King Bao Dai and other veteran revolutionaries would have rather seen the man whose name is Nguyen Ai Quoc and later changed into Ho Chi Minh, a patriot than a communist. Most importantly, Mr. Ho had dismissed the Indochina Communist Party and established the Coaliation Government with the participation of many non- communist members. My dad said “ you were cheated”. It was my dad’s saying which drove me toward the yellow star-red flag. Frankly speaking, it was the self pride of a teenager of 18 years old that kept me following Communism. Until the Land Reform campaign, I was disillioned and started to write. However, half of my writing was for my family survival and the other half was for myself. Those works which I wrote for survival, was actually a combination of slum without any artistical literary value. Until now, with “the Memoir of a Coward”, I can truly live and write so that readers and descendants may see that there was a time when artisdom like us have involved in deadful policies such as Land Reform. I do not hope to become a writer with my book but I do hope that my friends and descendants know how miserable our life was because we had to compose according to political orders.

- Nguoi Viet: During the Vietnam war, you stayed back in the North and your family migrated to the South. You have a brother in law, Lieutenant General Lam Quang Thi of the Republic of Vietnam. What was your view on the South society when the war ended in 1975?

- To Hai: On my blog, I have lessened my cowardliness by expressing my feeling in the article “a Visit to the Rich, a Question to the Fortune”. I arrived in Saigon after 1975 when my whole family had migrated to USA. It was like in 1954 when I returned to Hanoi, my whole family had migrated to the South. I was not as miserable as Duong Thu Huong when she arrived in Saigon and recognised that she was cheated. She had to sit down on the roadside, bursted out crying. However, I’ve known for sure that it is not a liberation war like the French one and that the South society is not the one being said by the Party that people were poorly exploited. Therefore, when I knew that my family had gone to the United States, I was very happy. My feeling was both missing my parents, brothers and sisters and joyful knowing that my family was freed safely. If they stayed they would have been imprisoned “for life” (sic). It is not my only view, other fellows who came from the North had the same feeling. I see the South society have enjoyed freedom very much. I’ve longed for the freedom of writers in the South. Writers in the South have their own dignity and been free to write irrelevant to any order. People have been free to earn their living, everywhere was plenty of goods. Rural people were enjoying the wild life with any kind of flying birds and swimming fishes. Unlike people in the North who always live in worry.

I was glad because of seeing that but I worried that the Party and the Government may conduct again the Land Reform policy, execution of owners and other deadful acts which make the South people sufferred. Fortunately, the South people had to suffer only half of what used to be to the North people. “Half” means that in the South, there were also Reform of Industry and Commerce, driving people to the new economic zones. But there were no execution of people, and no public condemnation by family members like in the North. I believe it’s not right that there are some South people who hate the North people in general. The reason is that the North people had to suffer from Communism much more terrible than that of their countrymates in the South. The North people had to suffer both mentally and physicalyl. Their sufferings were beyond any description. With my experience with Communists, I’ve given advice to some friends of mine who paid me a visit after 1975 such as Pham Dinh Chuong. I advised him to find a way abroad. I advised all my relatives who ever had an opportunity, should go.

- Người Việt: By addressing yourself as a coward, must you have been very brave to overcome the fear imposing on your mind for more than half a century?
- To Hai: This regime would not be changed if our people are so cowardly. If a normal people might be blamed once because of one’s cowardliness, a coward writer should be blamed a hundred times more. Because it is the writer whose mission is to sow idiology and good sentiments on people’s minds. If they dare not speak out loud their thoughts, they are terribly sinful.
Nowadays, as chatting with each other at a coffee shop, people seem very fervent in criticizing the regime. Even high ranking military officers are also having such fervent spirit. However, no one dares speak out their thoughts. There also are some brave persons such as Tran Khai Thanh Thuy, Le thi Cong Nhan, Nguyen van Dai... who have spoken out and accepted the price of years in prison. I completely admire those youngster. Besides, in general, Vietnamese people have been pinched under proletarian dictatorship while political leaders are trying to cling to their positions covering under the proletarian label. In fact they are following capitalism. However, who dares voice out! That behavior of keeping their mouth shut disappoints me. Therefore, I’ve writen the memoir addressing myself as a coward to free myself from the cowardly attitude which suppressed upon me for years. But to achieve democracy for Vietnam, it needs to do something more. Writing memoirs like me would not achieve anything. There is one thing that my memoir could do is to uncover some shades over Vietnam, and that’s it.

- Nguoi Viet: How to free our people from the fear of suppression by the communists since 1945’s Autumn?

To Hai: What I have seen is that most people did not speak out their thoughts. Some have publicized their real thoughts only after their death, such as writer Nguyen Khai, poet Che Lan Vien. Even intellects like them dare not tell the truth, let alone ordinary people. I must say that there were some others who did say when they were alive such as Hoang Minh Tuong with Saints’Time writing, Dao Hieu with Getting Lost... However, there’s not many as such. So, I do not see the way to free the people from fear so that everybody together may find the common exit for the whole nation.

- Nguoi Viet: My last question. Do you have anything else to say to Vietnamese readers?

- To Hai: My only wish is that my countrymates who are abroad should be vigilant over the communist government saying: they “say not what they mean” (sic). Today, they say this way, tommorrow they may say the opposite. Domestic pepole are very aware of such goverment’s behavior. I believe that the Nation is a common property, not of any particular interest. We must not leave it to a group, or a certain party to do whatever they want. I wish that my fellow citizen, who are either inside or outside the country, should not rely on hatred or differences in manners to drive a wedge between each other. We should not forget our common purpose is to fight for a better future for Vietnam. We have to believe that some day our nation will change. The whole country from North through Central and South will enjoy that enlightened day.
Nguoi Viet: Thank you for joining us in the interview